For almost everyone, that brings up visions of style to the nth degree.  This year celebrates Bond’s 50 anniversary as the ultimate British secret agent with license to kill!!!  This has been such a fabulous extravaganza of male tailoring it’s fun to peruse through it and look at all the styles.  The whole craze started when it was made known that President Kennedy was reading an Ian Fleming Bond book, and that started the craze.  The first one, Dr. No, was sort of a bomb.  Back then the handsome weight-lifting Sean Connery had one eyebrow and hair on the top of his head!!!  All of the other films have been successful – well except for the Lazenby snoozer!

I don’t normally talk about men’s fashions here, but because the sartorial factor is so high!  It’s sort of fun to look at all the bespoke wear that has passed from 1962 to 2012 (Skyfall this fall will be the latest addition).

Here’s a great little video on the sartorial aspect of the Bond movies, but what I love is the little snippets of the tailors in the movie working on some of the Bond goodies.  The designer also talks about how she had to design for each Bond…from Connery to Craig.  She didn’t design for all of them, but a lot of them.

This brings up the whole idea of wonderfully tailored suits for we sewists, and how highly they are valued.  You don’t get this at WalMart or Target, and once you’ve had one on your shoulders, you notice the distinct difference.  If you are in and around a store that sells them, just put one on and you’ll see the remarkable difference.  The main one is that the jacket has a shape to it that seems to be natural without a lot of weight in a seemingly effortless way.  And that’s exactly what has happened, the jacket has been manipulated to shape in just certain ways and this is what makes the darn thing fit so beautifully and effortlessly.  Wearing a tailored jacket or tailored garment is not like wearing anything else.

Why can’t we differentiate between the beautifully tailored shirt and the shirt from Target (many folks really think it’s very close to the same, therefore the glee in buying the shirt at Target for $15, while the tailored one costs $200).

Why is this important, because most sewist have the bad habit of comparing their creations to WalMart or Target prices, when they are actually more like the Neiman Marcus quality, but it’s like either we can’t, don’t, shouldn’t compare them to something of that high quality.

So here’s a look at all the bespoke-ness running amok in double 0 seven!!!  Enjoy, and don’t drool too much, your computer keyboard doesn’t like too much liquids on it!!

Sean Connery (Is there anything that will surpass Goldfinger – obviously the best – including the bit of flab around the middle to account for the fine taste in food and wine.) That suit and excuse me but that push up bra was so perfectly 60’s!

Roger Moore it’s hard to remember back then, but he was fabulously handsome, hence the role – he played Bond in more movies than any of the others. 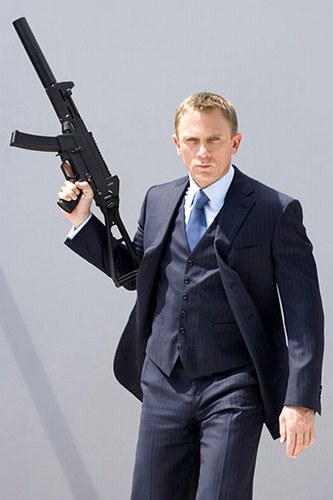 Daniel Craig – I have to say that the latest group of casting has gotten it right.  From the very first scene as Bond, this guy was right on…just the right amount of charisma, hutzpa, ego, looks and style wrapped in a very nice package!!! Hubba, hubba!!

Pierce Brosnan – although he had the looks and the look down, he somehow didn’t hit it – there wasn’t that magic click like there was with the other three above.  He did it cause his then deceased wife always thought he would be great in the role.  I think he got it out of his system and moved on.

Although he had the looks he did NOT have the look.  This was supposed to be a kinder gentler Bond – that’s like trying to make a softer fluffier rock to fall on – it just wasn’t going to happen.  Now we’re getting into the “jumping the shark” syndrome.

And of course the always winner of the worst Bond – George Lazenby,  Enuf said, his position is well secured! (even the clothes look bought off the rack!)

So who’s your fav Bond….worst Bond!