Where’s the next market for clothes.

I’m still working my way through Overdressed:  The Shockingly High Cost of Cheap Clothing, which is to the point of how we got where we are.  It is filled with stats and figured, which isn’t all that important, except that the author as done her homework very well.  But what is more interesting to me is how the consumer has been led down what appears to be a lily-covered path of glorious clothing only to end up with a product that is not only less than what they had before but much more expensive. 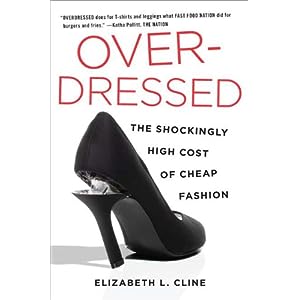 The really amazing part is that this trip into a world of cheap fashion has so memorized the consumer that not only is there no twelve-step program to get out of it, it appears the addiction is worse than a cocaine addiction as we are not able to stop, nor do we want to.

So what does this have to do with sewing?

Cheap fashion is just that.  It is cheaply designed and constructed with cheap fabrics and notions – it is an aberration in the market place.  It is at the very most radical end of the spectrum of clothing and yet is being hailed and sold as something normal – it has become the new standard by which all other entrants into the market must meet or be judged.  It is so prevalent, that many folks come into my class and membership expecting to copy the garment of their choice for less than what they can buy a garment at this distorted price.

It’s time to ask a very important question:  Is this REALLY the type of sewing we want to learn?  Is this REALLY the type of fashion we want to wear?  Are we really interested in wearing a garment from the cheapest fabric, made the cheapest way possible?  Do we really want to learn the cheapest, quickest, least time-consuming way to sew up a garment?  Our only goal being: Will this garment survive 5 or 10 washings?…..or Will this garment last through 7 or 15 wearings before it is stretched out of shape?

Let’s seriously think about this for a minute.

Let’s make this even more plain:

This is so bizarre, yet is permeates thought; our entire philosophy and mind-set of buying clothing.

We treat clothing, not as some low-life step-child, but as some after thought, in price.

Where it the quality?  Where is the demand for quality?  Why is it that we believe that wearing sub-standard (actually it’s more like throw-away) clothing is acceptable?  What does this say about ourselves?

I’ve said this before, but my mother purchased a camel suit in the mid 60’s for me after I graduated from high school.  Today that would cost about $2,000 today.  I thought she was nuts.  It didn’t occur to me at the time, but I wore it all through college, and into my “Mary Tyler Moore” 8 years of my beginning career, then into 5 years of marriage.  That’s about 17 years.  I did have to retire the skirt before I got married, as I had shortened and lengthened the hem so many times I had hem lines, but the jacket became a favorite jacket/coat on it’s own.    If you do the math – this works out to $118/yr.  That’s probably about $10/month.

Every time I wore the jacket/coat it was wonderful.  I loved wearing it and it was a dear, dear friend.  It looked fabulous on me, and always kept me warm and not only did exactly what I wanted, but it also looked good every single time.  Over almost 2 decades, it worked fabulously for me.  I finally had to retire it as a jerk spilled Coke all over it and it didn’t come out at a football game.

When I look at a jacket (usually something like a sports jacket) from Target (H & M & Forever 21 aren’t close, but  they are on the internet), and think it may only last through a month or so wearings, I’m OK with it.  The jacket costs $50 and I don’t get upset. The jacket lasts 3 months – to apply the same formula as my camel jacket, that means I would have to buy that jacket 4 times a year for 17 years which would cost $3,400, which as you can see is way more than the $2,000 spent.

Additionally, the style of the jacket would have be dated after the first year, and certainly after the second, so wearing it for 17 years would not probably be as enjoying and fulfilling as wearing the camel jacket.  So after about 3 months, I wouldn’t even consider buying it again – I would just go buy another jacket that I would throw away, and another to throw away, and another.

This is not only a waste of money but of time and resources, when I could have a go-to jacket that has known good qualities in my closet for season after season.

That really puts things in perspective.

What happened to the demand for quality in clothing?  I’m not even talking about excellence.  This is just basic and standard benchmarks for clothing construction, design and fabrics.  Part of it is that we’ve totally lost the education needed to make those kinds of purchases.  They’ve been breed out of us by the media and some designers are complicit in this as well.

Even though the stripes are not symmetrical, the collar matches

Once we start seeing clothing in a completely different light, then the construction of sewing begins to be seen in a whole new light.

The idea that we would want to search for a method of making clothing to compete or meet the standards of WalMart, becomes very expensive (remember the $12,000 jacket?)

But looking at it from another point of view:  Every time I wore that camel jacket I loved it.  It fit well, it was made well and the jacket looked fabulous on me.  The jacket from WalMart, might fit well for the first couple of wearings but would have stretched out of shape, fallen apart, needed some work.  The bottom line is that it just never really worked that well.

So where is fashion’s next market after this bottom-end has been soaked?  How much cheaper can clothes get?  How much less quality will the market accept?  Where is the next market?

If you really put the math to it and really use your noggin about this, the next market should be a more quality garment constructed with quality techniques.

But that might not be what is available……unless you’re a sewist!