My cousin, who is a hoot…..played Quanto in Total Recall with Arnold S.  He has great stories to tell of his adventures with zee arnod, and of the ramifications of playing that character – which are also hilarious.  And his lovely wife, Milena does costumes in Hollywood and in Opera, which I find even more fun!

And Milena has some fascinating stories as well!

[private]And I would never say this out in public, but after seeing this shot of Meryl….it brings her comments back to mind.

I’ve continued to notice that her appearances and more importantly her clothing is really just plain – – bad!  She practices looking like some frumpy old lady that we all knew when we were growing up.  Even if she isn’t svelt, and I don’t really care about that, there’s no excuse to run around in a glittered sheet masquerading as a bag!  It’s like a glorified bag-lady look! 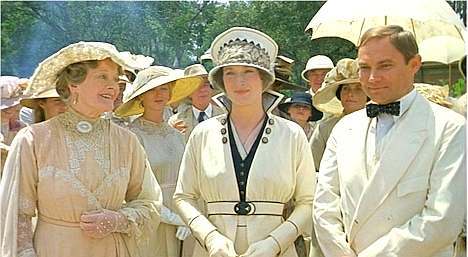 These were no easy task to design and create these garments.  Knowing Milena she did gobs of research and not only liked to have her characters wear the correct styles, but wanted them also to have the correct under garments so that the outer ones would lay nicely.  This was key in Chariots of Fire.

Apparently I wasn’t the only one who felt that way about Ms. Streep.  While Milena was working on Out of Africa, her fittings were a nightmare with Ms. Streep.  She never wanted them, and when she had to have them was disagreeable and just hard to work with. 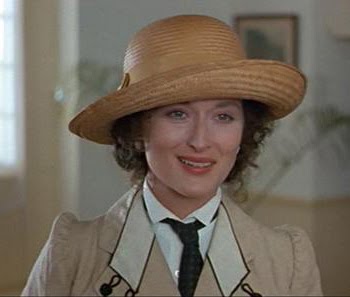 I never understood this sort of attitude, for all Milena was trying to do was her job and make Ms. Streep look her very best.  It wasn’t like Milena had a grudge to settle or was trying to make life difficult for Ms. Streep, and yet each fitting became more and more difficult.  Finally Milena had to enlist the help of higher ups to schedule and have fittings.

Milena is usually very is more interested in doing her job than anything, so her speaking out about Ms. Streep was really out of character for her, which to me says that it was pretty difficult and Ms. Streep’s behavior was pretty egregious.

I think my favorite movie she did was Dick Tracy cause it showed so much creativity.  She could only use comic colors – like what you see in the Sunday comics.

I mean think about it – these are your color palette and that’s it.   Milena said they used 7 Aquascutum coats (Aquascutum is the premier designer of the trench coat that all private eyes wear….particularly in the movies!)

This is why Warren Beatty’s coat was yellow – not because of any color problem, but because the newspaper couldn’t publish tan or khaki or any difficult colors like that.  Tracy’s coat was yellow in the comics because that was the best color besides white, and white would have been so boring.

[/private] So today when I see Meryl and the way she dresses, she’s most likely thinking that she doesn’t need a stylist, and that she can dress herself, and it shows.  Most actors and actresses make a living by being the model or mannequin for some one else’s vision – the director, writer, costume designer, set designer, and all that, so they really aren’t that experienced at making these decisions on their own.

Fortunately clothing designers have figured this out and found wonderful ways to exhibit their clothing other than the runway.  For me, it’s a lot more fun cause not only do you get to see the gown move, but I also see a more practical side of wearing a gown or look – does it work or not – only when they wear it  (hopefully w/o wardrobe malfunctions) can you tell.