For whatever else you may think of Baroness Thatcher, she did have her own style.  And not only that it telegraphed exactly what she wanted, but to my mind it telegraphed to the world what it was to expect from this lady.  An article by Suzy Menkes this morning really points that out (you know how much I love Ms. Menkes and her fabulous way of writing!)

Nothing shows this better than pictures, so here we go down memory lane.

Even though this is a later picture, it shows perfectly how the Baroness’s dress mattered.  Here she is in a business suit with a high stance lapel, satin collar for formaility as compared with the very conservative lines, but no business collar of the Queen. 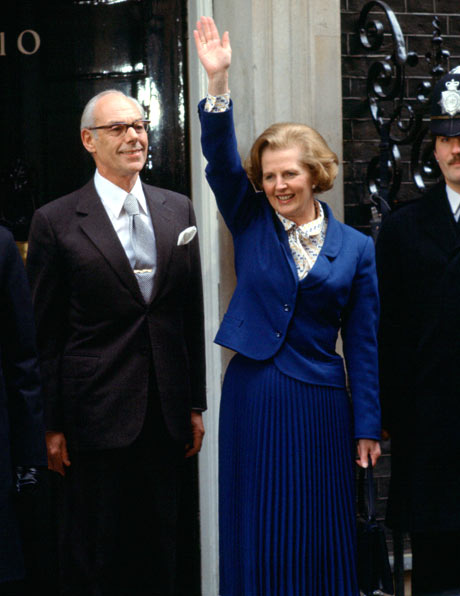 Here she is on the day of her election in her familiar blue color.  She knew her colors and wore them repeatedly.  This is a very common and often practiced trait of Europeans more than Americans.  We Americans seem to think that changing clothes often means that we are better off than if we wear the same wonderful garment repeatedly.  Actually it’s the opposite for anyone who has tried this (more on this later this weekend), but for now, it’s fun to note and see the progress of Thatcher’s wardrobe.It’s really in stark contrast when you see her next to another high-profile lady of the time: 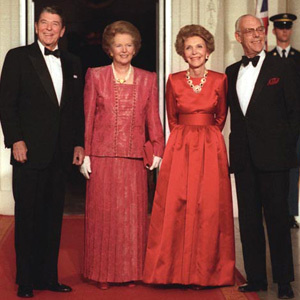 Although not in her traditional blue, she has the jacket skirt which is far more businesslike, and especially here next to a much more feminine Nancy Reagan.  As Mrs. Reagan was not the head of a government she could look frillier and did.

This is in total stark contrast to Thatcher, yet of exactly the same time period.  It shows the dichotomy and duality of feminine dress at the time.  You truly did dress how you wanted to be perceived or how you wanted to be – at least hopefully you did.  There were cases where you were in a “lot” in life and had to dress the part whether you liked it or not:

And although she didn’t look bad here,  Princess Diana was not the happiest of souls as time grew on, and became even less happy.  Here she is dressing the part, although she began to more and more dress herself (but that’s for another blog).
There’s no greater way to study Margaret Thatcher’s look than to look to the movies and television: Probably one of the most familiar, and Ms. Streep has the look down pat….the soft bow at the neck, the simple yet very tailored jacket, pleated skirt (although you can’t see it here) and very straight-forward look that not only became the “look” of Thatcher, but also the embodiment of her style. This is sort of a folly image in the last of one of the 007 movies (I think this is one of Roger Moore’s), but it’s a characterization of Thatcher’s look:  the higher collar softened with the scarf, made more masculine with the pocket hankie and the tailored lines of the collar, pocket and center front trim.  Even though this is just a characterization, sometimes these are the most telling because they over-exaggerate and therefore make it easier to see the style that was Thatcher’s. 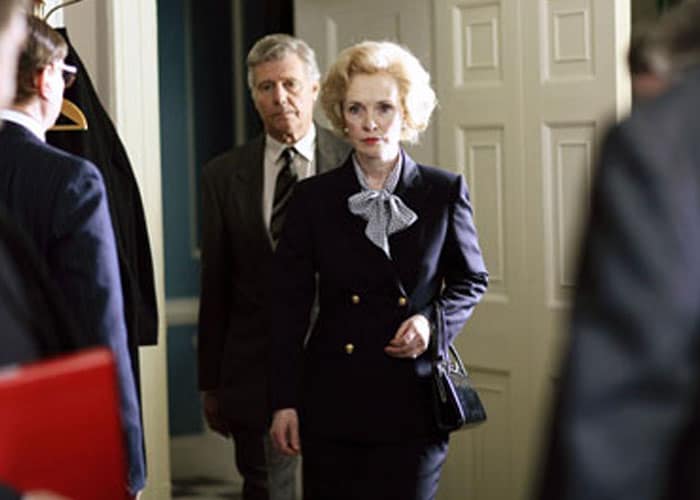 Whoa!!!!  Is this a woman on a mission or what!  Here the characterization (in dress at least) is one of purpose, and a don’t get in my way look!!!  There may be a soft bow around the neck, but this walk and a demeanor is anything but soft! There aren’t too many full shots of Lesley Mannville as Margaret Thatcher, but this is about as a full as it gets….but again with the traditional pearls and soft bow at the neck with the tailored collar.Today there is more freedom about how we can dress, even in power-dressing at the office, but I sort of miss these clear boundaries and guidelines as they clearly defined who Thatcher was, what she wanted to accomplish and how she wanted to present herself.  Sometimes I think these lines can get so blurred that they are not only confusing they are non-existant which leaves the rest of us sort of doing some ESP or reading minds which is never a good place to leave folks around you.I’m not so much of a proponent of this more lax boundaries, because from my own personal experience I have noticed the benefits of dressing for purpose or a particular look.  I think my fav example is walking into the local hardware box store:  when I come from church on my way home, I can’t get enough attention – everyone wants to help.  However when I’m dropping by in the middle of a project in the grubbiest of clothes, I can’t find help!  It’s not just a haphazard occurrence.  It’s truly the way I’m dressed, and I don’t hesitate today to use it.I’m a shameless about dressing for purpose – when I dress for weddings, it’s one way; when I dress for class, it’s another; when I dress for seeing clients, it is yet another.  But in all cases, I’m taken for exactly who I want to be.

Thanks for this great post! Thatcher really knew how to send a message through clothes.

Yes, wonderful post. I think your perspective becomes even more salient as we age. If I go shopping without make-up, in sweats, I get no eye contact and dreary service. Sloppy looks so grim with white hair.