OK – I’m baffled why Simplicity discontinued this pattern.  It was a classic.  It would/will never go out of style.  I’m at a loss.

Unless it was for one reason:

That ruffled center front is so awful – it’s the worst version of the shirt/blouse and doesn’t even begin to describe the beauty of this thing.

But to explain why I’m so nuts about this pattern, here we go.

Now from time to time I’ve known pattern companies to have a popular pattern, like this one hopefully is, and they will take it out of the book and re-release it.  My hope is that is the case here (and I’m screaming as loudly as I can to Simplicity to do that), and even with a better picture.

Everyone should have at least one white blouse in their wardrobe, and if you don’t – go get some nice (not quilting quality – I’m talking REALLY nice) cotton and make yourself a white blouse – it goes with anything.  I’ve even worn a white silk blouse to the most formal of balls – it’s that versatile!

And that’s just the front. 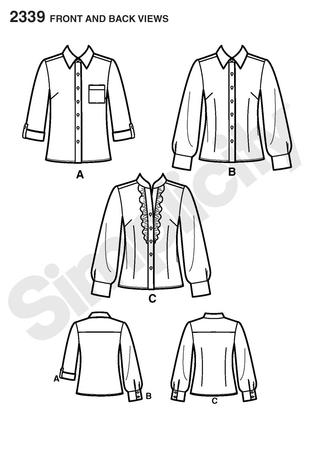 Look at the back.  It has a yoke, and this is a most excellent place to alter for prominent shoulder blades – no matter if you are a jock or maybe you have sloping shoulders from age, you can fit with this yoke.

Don’t like the yoke – after you make it with the yoke, you’ll have a dart in there – like this:

OK – when you have adjustment through a back yoke (and BTW if you aren’t making an adjustment on this seam, you’re missing a fitting opportunity).  But when you make this – you’re curving every so slightly on the ending (both sides, I’ve just shown one side for simplicity), and you can take that and make a dart, then rotate it into the shoulder seam or neck seam.  Both of these are traditional placements for the shoulder/neck/sloping back area.

Just another feature of this pattern that makes it so easy to fit, but also so easy to make into another garment – a dress, tunic, top, shell, shirt, blouse and on and on.  About the only things you can’t make are jackets and coats (of course I’m talking about stuff for the upper half of the body) which usually require heavier fabric and therefore a little more ease in the size of the pattern.

For some more ideas, I’ve put up some of my favorite classics on a Pinterest Board.  In the mean time, there’s another one out there that can work (and it includes all the usual suspects, FBA, front waist/bust dart, back waist darts and back yoke).  I don’t like the pockets on this one, but then 2339 had pocket(s) too, just don’t put them on.  It also doesn’t have the marvelous bust sizes like 2339.  We just have to work to bring back 2339!

Anyone for a revolution?!

McCall’s 6436 is a classic shirt with cup sizing.

Thanks Carol, I’m going to check that out. Honestly, I’ve had so many horror stories on McCalls patterns, that I don’t look there as often as I should. If this is an old standard, it’s probably OK. Thanks for the suggestion!

I never gave this shirt a second look, maybe because the picture.
I didn’t realize it had so many fitting options. Thanks for pointing it out.
There are some on eBay 🙂

Your Own Style
Previous Article
My favorites from 2013
Next Article
©sewingArtistry.com