Fashion in the Age of Cheap

As summer turns into fall, the Fall Fashion season kicks into full force. The Fall Season has always been known as the beginning of the fashion season, which makes it the most important fashion season of the year.

But fashion today is different that the glory days of the couture houses in Paris (in the 50’s and 60’s).  Fashion is immediate.  Fashion must be delivered in the store in hours, or else it’s not marketable.  Zara, has mastered this and as a result the rest of the world has to follow or die.

What was once consider no only law but a law that if you don’t follow you are obsolete in seconds, is now being questioned (thank heavens).  More and more folks are resisting and pulling away from this FCF (Fast/Cheap Fashion) that must be fed every 2 weeks or sooner. 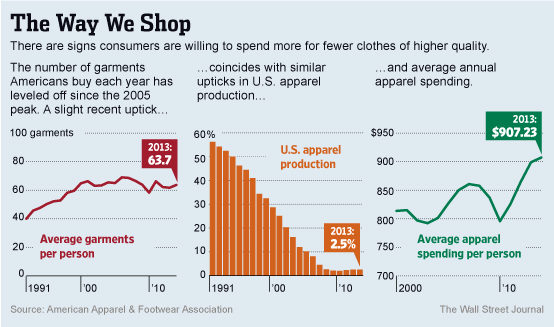 This article talks about how that generation that grew up with more and more clothes available for less price is no longer important…that they are gaining a conscious about their clothes and are wanting to spend more and buying less.  It’s like this generation is growing up!

How much consuming is too much?

Is the clothing consumer addicted to clothing or the acquisition of clothing and the addiction of buying?

What message/trait/practice am I enabling when I buy this $1.80 camisole?

What sort of value am I building in my wardrobe?

Finally, I think the stuffed closet with an abundance of clothes, albeit that they are junk, has finally gotten through.  And how that affects we sewists, is that indirectly and subliminally this has affect a lot of sewists’ judgement about fashion, what we sew and the bottom line…….what we’re worth.

Or maybe it’s just that the part of the consuming public that was supporting the FCF industry is growing up and finally wants something more valuable than just a closet full of junk.

Sewing isn’t something you pick up overnight.  It takes practice.  Then you have the fitting dilemma(s) – what’s a person to do?  Our friends turn to us and think that because we can sew, we can whip up a top in no time at all.  After all it would only cost $1.99 at the store, so it shouldn’t take longer than about an hour or so to make this garment, and why wouldn’t we be ready to jump at the opportunity to donate a hour or so to our friend?

This is exactly the sort of perspective that we ALL have of clothing.  It’s cheap, easy to acquire and enormously devalued.  But what we don’t get is he cost of this cheapness, and the more it’s looked into, it’s not really all that cheap.

The main cost here is understanding the process.  Yes, there are incomprehensible working conditions, yes there are un-renewable resources being wasted and abused, yes there are human resources abused, but for me the main cost is the millions of dollars that consumers throw away on nothing.

We wouldn’t dream of spending $30 for a computer to use it one or two times.

We wouldn’t even consider buying a home for $1,000 to use it a couple of nights (let alone rent an apartment or room in a hotel for that amount of money).

And we couldn’t fathom paying pennies for an apple or orange that was anything less than the most nutritious, juicy, tasty, crisp (if an apple), easy to peel (for an orange), possible.

But clothes seem to be a totally whole other thing.

I’ve been asking myself this question a lot, and I come up with some interesting observations.

After we finally discovered fast food can kill us, we started looking into how food is prepared, how it is stored, collected and processed before it gets to our bodies.  This was an education process but it also involved re-thinking our whole idea about food preparation and what the Women’s Movement told us about cooking in the kitchen (and the alternative to the Women’s Movement = being chained to a wood-burning stove 24/7).

After we got over that initial out-dated perception of cooking, we discovered and learned not only how to purchase healthy food, but we learned what it was – I know novel, but it did have to be re-learned.

And again with home-keeping. After living in conditions that rivaled the Middle Ages (where doctors saw diseases that had been lost to history reappear in the Haight-Asbery district after the Summer of Love), it was clear that although the Women’s Movement was telling us that we no longer had to keep house, we really did.  Not only did we learn we had to do it regularly, we learned what we had to do and why.

The same thing is happening with sewing.  Although it appears that we are saving buckets of money by purchasing oodles of these $1.99 camisoles and the $3.80 top, but in truth we’re not.

The big story that we’re missing here is that the consumer is being ripped off – – royally – like way beyond the comprehension of most consumers.  If this were food, savings bonds, cars, computers or almost any other product, there would be a hew and cry for a congressional investigation into the horrific, illegal, and deceptive practices and nature of the industry.

But alas – it’s just clothes.  And because it falls under the caveat emptor rule – let the buyer beware.

Bu how care the buyer beware, if they aren’t even AWARE?

As the generation who supported the FCF industry grows up and finds that there is life (and clothes) that do last longer than a couple of washings, the industry will have to and must respond.  The FCF industry is noticing a slow-down in sales and a trend toward more expensive (at first blush) clothes that last longer (which is far less expensive than purchasing something cheap every 2 weeks or so).

Hopefully the knowledge of sewing won’t be far behind.

I really enjoyed your post. I love how we are thinking about some of the very same big issues.

You make excellent points that got me thinking further on the topic. My reply was so long I just made it into a response post on my blog. I’d love see your reply to the questions and ponderings I had to this post. Excellent, excellent topic.

I’m new to your blog, but your post has me curious about how are you choosing to live differently in your life?

Thanks Gwen for you reply – I did reply to you on your blog, unfortunately, I’m not very brief!!!!!!!

Interesting thoughts. I guess one advantage of being tall is never being able to walk into a store and pick up clothes on a whim, so I never got into the fast-fashion mindset too much. Or fashion at all really, now that I think about what I usually wear. I used to sew garments several decades ago, and am now getting back into it again, so have much to re-learn, esp. the fitting!

On the fast fashion mentality and sewing – I think sewing has gone there. How many of us have stashes of not-the-best-quality fabric, notions, tools and patterns bought at fabric chain stores on sale (at least in the US), and now gasp at the cost of truly nice fabrics and interfacing (even on sale) that could last for years. Cheap tools? Often the thought is “Sure, why not, they’re cheap to replace.” I used to fall into that line, still do on occasion. But, I learned, good tools are much nicer to use, good interfacing makes your clothes look better, and good fabric is sweet to work with and looks great in the final garment. I wonder if it’s a confidence issue? I know I have a harder time cutting into more expensive fabric than I do cutting into the bargain bin ones.

Inspiration or Theft
Next Article
©sewingArtistry.com