For many, this seems more of the rule rather than the exception.  A lot of my students come to me so exasperated that they are ready to throw their sewing project failures, thread, equipment, and even their sewing machine in the trash and do something else.  I remember feeling that way before I met my sewing teacher and mentor.  I would get so frustrated and exasperated because I couldn’t make an outfit and look at the picture on the pattern and think, “What in the world is the matter with me?  What do I not know?  Where can I find this out?”  All the while, thinking if I could only learn all the right techniques it would OK….or if I could simply learn how to fit, it would be OK…or…..ANYTHING!!!!

This recently hit me again when I started reorganizing this site.  If you haven’t noticed changes (they are really minor right now), you will in the future, and if you want to keep up to date with them simply fill in your name and email in the little green box here:

In the green box simply fill in your name and email and you will be kept up to date.  In addition for free, you’ll get a weekly goodie from me.  If you don’t like it, you can always unsubscribe, but this is the best way to stay up-to-date with what’s going on in and around the site.

Today in the world of airbrushed this and pixel removal that, there’s no telling what is real and what isn’t in a fashion photo shoot.  Even as important is what is going on that the camera doesn’t show like this great shot of Patricia Heaton’s book! 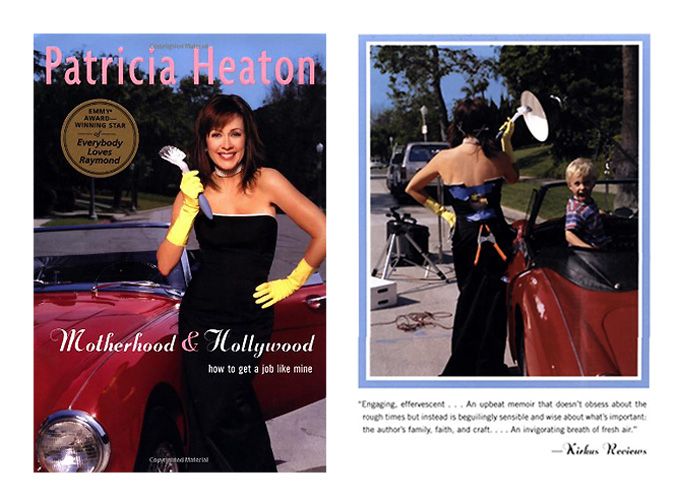 The front looks downright glamorous and very doable, while the back is more the truth – especially in that dress!!!!

So it’s no wonder sometimes if we can’t make a garment like what appears on the pattern envelope cause there are several things happening here:

Is it any wonder we have trouble reflecting what is shown on the pattern envelope (not counting what’s in catalogs, magazines, and online photographs).  I’m not writing this to be extra negative, but only so that this is put into perspective.  Probably a more accurate depiction is a search for the pattern on Pinterest or Google Images showing everyday sewists completed garment.  Here’s a perfect example of Vogue Patterns #1389.  The picture on the left is what is actually on the pattern envelope.  Most people, if they made the garment so it fit like that, would think they had made a mistake.  The zipper looks warped at the bottom and the fanny is so accentuated that – well, I wouldn’t wear this even if I lived on a treadmill and my figure was beyond reproach.

Why wouldn’t I wear this version on the left? Because it’s TMI – too much information about my shape.  The skirt (fixed) on the right looks way better because it is shaped to the body.  Look at each side again, and again – which one of those gals has smaller hips?  Amazingly it’s the one on the right, even though it takes more fabric to make it!  Anymore we can’t even use the word fit because that means the picture on the left.  When I use fit with my clients and students, I have to redefine it.  It means shaped and skims the body but does not hug the body at every corner to   The point is that this is the norm out there to be set as an example.  If this is all you’ve seen, how are you to know 1.) that it’s wrong and 2.) that it needs to be fixed.

Originally, sewing wasn’t set up to be a crapshoot, because sewing was the only way a lot of folks had to dress and they needed to know how to do it to cover their bodies so as to protect their skin from the elements.  Why and when this happened is another post, but what’s important to know is that if your garment doesn’t turn out exactly like the envelope, there’s probably a reason, and unfortunately, (except with a few pattern companies) patterns aren’t as reliable as they used to be.  It’s good to know that so that you do not get discouraged.  And it’s good to know so that you aren’t trying to achieve some unattainable goal.

Believe me, sewing is not a crapshoot!  I know, because I used to feel that way.  Most of the patterns do work, however, they are only a starting place.  Yes, if you sewed when you were young things fit right out of the envelope.

Remember patterns like this?  A couple of darts, a couple of pieces and you were done.  That’s because you were a young sprout made of bone, skin and a little extra.  Today you are a fully matured person reflecting your life experiences (I don’t care what anyone says, pregnancy leaves its marks), and genetics.  This is the real world.  This is the world that used to be fitted (yes and it was really fitted, not wrapped in skin-tight stretchy fabric to show every curve and bump). 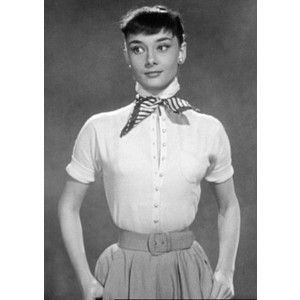 Most of us think of Audrey Hepburn as being skinny.  But today – looking at this she has a horrible muffin top and in addition, it looks like her midriff is hanging over her belt.  Actually, this was very fashionable back then.  Back then the accentuation was on that thin waist and women would cinch in that sucker even if everything else flowed out above and below it.  Today we hardly see the thin waist, we see the muffin top!  The point here is that with today’s eyes, even Audrey Hepburn looks fat!!!

Yes, the fitting gets harder as we get older, but it’s not impossible.  In the following weeks, on my weekly email, I’ll talk more about this.  But this is something that doesn’t have to happen.

And there were times when I thought I was insane!  At the same time, it’s worth noting that if your sewing techniques aren’t working, then it’s time for a change.  Change is hard.  Sometimes finding the right change is even harder – because there are a lot of right changes out there that will work – it’s finding the ones (that’s right there’s more than one) that work for you.

So I know what it’s like not to be able to sew and how frustrating it is.  It can’t be that hard cause there are people all over the world who do not have university degrees and their hands work the same as mine.  I had the willingness, but not the knowledge and didn’t know what I didn’t know so didn’t know what to ask!

But I also know how empowering, freeing, exhilaratingly satisfying and remarkably magical it is to sew for yourself and fit yourself.  And that’s what keeps us searching!

Thank you so much for a wonderful and life-affirming post! Now I only need to find shapes that flatter me which is a trick in itself.

Yeah – we all need to be reminded of these things. Sometimes I think we all get involved in the minutia and forget that in the bigger picture our little tiny foils won’t show and don’t really matter!

Bless you! I sent a copy of the email to my daughter. Not so long ago she bought a dress that had almost zero ease. I warned her that the first time she sat down she was liable to rip it. I have not seen that dress again. LOL She bought shorts last week, that looked just as tight, and bless her, she promptly sat down and showed me the 2″ ease she had. Still TMI, but a shade better.

Great post, thanks!
What pattern companies in your opinion are reliable? I don’t wear my clothes tight, but, I’m interested in learning to better fit patterns. Which are the best and why?

Believe it or not, I really like Simplicity these days. They seem to be better drafted than some of the others. If you stick to some Vogue patterns like those done by the Tilton Sisters (this also includes some Butterick by Katherine Tilton), Claire Shaffer, Sandra Betzina, and those done by sewists, there seems to be a better outcome than going with those done by designers. But by far my favorite go-to company these days is Burda and BurdaStyle. I like the BurdaStyle cause they are all downloadable. They do not contain seam allowances, but when you are altering this soooo much easier than having to measure, take out the seam allowance, then make the alteration, then re-add the seam allowance. When drafting from these multi-sized patterns, I can easily draft from a size 10 shoulder to a size 8 waist (I had no kids), to a size 12 hip to a size 10 height and come pretty close to a good fit – THEN add the seam allowance (which is the width of a standard tape measure) and I’m done. Burda patterns have a bit fuller (more normal) cut, and are drafted well, which means that the armhole fits into the armscye like it should, where the princess seams fit like that should and that sort of thing. I like the fact that they are downloadable so they are available to everyone, and a little more green than simply printing a bunch of patterns only to throw away the patterns if they don’t sell.

Claire.
I have been a long time reader, and I want to thank you for your blog posts…they always seem to echo my own opinions and I always look forward to reading your words of wisdom!

I often wonder if people take the time to look in a mirror before they leave the house and I too feel that leaving a bit to the imagination is more attractive than displaying every asset (or distraction) that a person thinks they have.

That being said, I have always preferred clothes that feature simple, fairly conservative, lines and colors. I was raised to appreciate this sort of styling, but often wonder how much our preference in clothes reflects the atmosphere in which we were raised. Does our career choice also play a significant role in our choices too? It must! It is fascinating to consider all of the factors that shape our personal tastes!

I am new to your blog. I want to begin sewing again, but am so frustrated at fitting my tall and slender body. (I know, I know, people roll their eyes when I say how frustrating it is, but it is!) I am forced to buy tall clothing from a limited number of online companies, and nothing ever fits me properly. Throw in the fact that now I am considered “mature” and have never really discovered what my style is, it is difficult to know what to wear to flatter my body. How does one sew and really fit oneself, if there is no one to help you? I do have a dress form which I have never really used. I sew very well, I just don’t understand fit. Any suggestions?

From the past....but worth a second look
Previous Article

Sewing Is More Than Covering Your Body
Next Article
©sewingArtistry.com